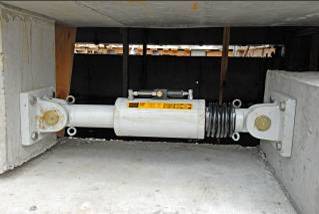 Connectors react according to the speed of movement involved and act as safety belts: in the event of rapid movements they are blocked and create a rigid connection between the structure and its supports.

The TRANSPEC S is mechanical connector, consisting of an anchor block through which runs a steel bar which becomes blocked in the case of an earthquake, thus blocking also the structure.

The TRANSPEC SHT is a hydraulic connector, comprising a cylinder filled with a special fluid in which a rod with a moving piston separates two internal chambers. The chambers only communicate through a valve. In the event of rapid movement, the valve is blocked, thus preventing any flow of fluid and therefore any relative movement of the structures to which the connector is fixed. 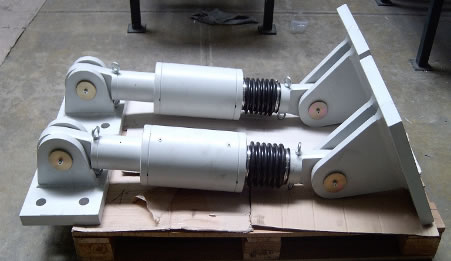 Dampers are energy absorption devices which are able to limit both the movements and the loads to which the structures are subjected during an earthquake. The TRANSPEC SHA consists of a cylinder filled with a silicone fluid in which flows a piston free to move in both directions thanks to a suitable hydraulic circuit which divides the cylinder into two chambers. Through the movement of the piston within the cylinder, the fluid flows in the circuit warming up and thus dissipating energy as heat. Depending on the design requirements, the hydraulic circuit is designed and produced in order to dissipate the required amount of energy.

The prestressed damping spring TRANSPEC PDS combines the advantages of a Fluid Viscous Damper and a Hydraulic Prestressed Spring. The spring behavior will relocate the structure to its initial position after earthquake. It works also as a fixed point, restraining movements under standard service conditions, thanks to the initial prestressing force in the spring. In seismic situation after exceeding the threshold of prestressing force, the device operates as a damper.